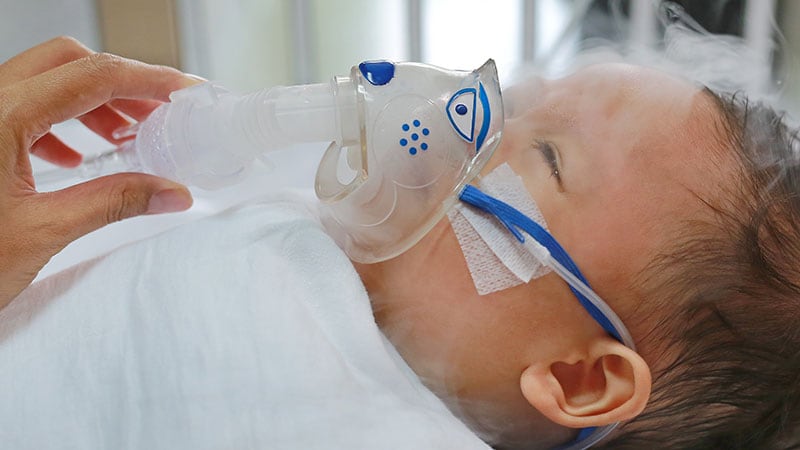 Doctors suspect the worst respiratory syncytial virus (RSV) season in years just ended, and the story of a child who had a serious respiratory infection provides a glimpse of what health care providers saw in the fall of 2022.

RSV cases peaked in mid-November, according to the latest Centers for Disease Control and Prevention data, with RSV-associated hospitalizations in the United States among patients 0-4 years having maxed out five times higher than they were at the same time in 2021. These surges strained providers and left parents scrambling for care. Fortunately, pediatric hospitalizations appear to be subsiding.

In interviews, the parents of the child who had a severe case of RSV reflected on their son’s bout with the illness, and doctors described challenges to dealing with the surge in RSV cases this season. The physicians also offered advice on how recognize and respond to future cases of the virus.

“I didn’t even know what RSV was,” said Malte Witt, whose son, Sebastian, 2, was recently hospitalized for RSV in Denver.

Mr Witt and his wife, Emily Witt, both 32, thought they were dealing with a typical cold until Sebastian’s condition dramatically deteriorated about 36 hours after symptom onset.

“He basically just slumped over and collapsed, coughing uncontrollably,” Mr Witt said in an interview. “He couldn’t catch his breath.”

The Witts rushed Sebastian to the ED at Children’s Hospital Colorado, expecting to see a doctor immediately. Instead, they spent the night in an overcrowded waiting room alongside many other families in the same situation.

“There was no room for anyone to sit anywhere,” Mr Witt said. “There were people sitting on the floor. I counted maybe six children hooked up to oxygen when we walked in.”

After waiting approximately 45 minutes, a nurse checked Sebastian’s oxygen saturation. The readings were 79%-83%. This range is significantly below thresholds for supplemental oxygen described by most pediatric guidelines, which range from 90 to 94%.

The nurse connected Sebastian to bottled oxygen in the waiting room, and a recheck 4 hours later showed that his oxygen saturation had improved.

But the improvement didn’t last.

“At roughly hour 10 in the waiting room – it was 4 in the morning – you could tell that Seb was exhausted, really not acting like himself,” Mr Witt said. “We thought maybe it’s just late at night, he hasn’t really slept. But then Emily noticed that his oxygen tank had run out.”

“Many hospitals are really being overwhelmed with admissions for RSV, both routine RSV – relatively mild hospitalizations with bronchiolitis – as well as kids in the ICU with more severe cases,” said Dean Blumberg, MD, chief of the division of pediatric infectious diseases at UC Davis Health, Sacramento, said in an interview.

Blumberg believes the severity of the 2022-2023 RSV season is likely COVID related.

“All community-associated respiratory viral infections are out of whack because of the pandemic, and all the masking and social distancing that was occurring,” he said.

This may also explain why older kids are coming down with more severe cases of RSV.

“Some children are getting RSV for the first time as older children,” Blumberg said, noting that, historically, most children were infected in the first 2 years of life. “There are reports of children 3 or 4 years of age being admitted with their first episode of RSV because of the [COVID] pandemic.”

“People who should have been protected often weren’t protected yet,” Kusma said in an interview.

On Nov. 17, in the midst of the RSV surge, the American Academy of Pediatrics issued updated guidance for palivizumab, an RSV-targeting monoclonal antibody labeled for children at risk of severe RSV, including those with pre-existing lung or heart conditions, and infants with a history of premature birth (less than or equal to 35 weeks’ gestational age).

“If RSV disease activity persists at high levels in a given region through the fall and winter, the AAP supports providing more than five consecutive doses of palivizumab to eligible children,” the update stated.

Insurance companies appear to be responding in kind, covering additional doses for children in need.

“[Payers] have agreed that, if [palivizumab] needs to be given for an additional month or 2 or 3, then they’re making a commitment that they’ll reimburse hospitals for providing that,” Blumberg said.

For ineligible patients, such as Sebastian, who was born prematurely at 36 weeks – 1 week shy of the label requirement – treatment relies upon supportive care with oxygen and IV fluids.

At home, parents are left with simpler options.

In the Witts’ experience, that last step may be easier said than done.

“Every time a nurse would walk into the room, Sebastian would yell: ‘Go away, doctor! I don’t want snot sucker!'” Mr Witt said.

“If you over snot-suck, that’s really uncomfortable for the kid, and really hard for you,” Ms. Witt said. “And it doesn’t make much of a difference. It’s just very hard to find a middle ground, where you’re helping and keeping them comfortable.”

Some parents are turning to novel strategies, such as nebulized hypertonic saline, currently marketed on Amazon for children with RSV.

Although the AAP offers a weak recommendation for nebulized hypertonic saline in children hospitalized more than 72 hours, they advise against it in the emergency setting, citing inconsistent findings in clinical trials.

To any parents tempted by thousands of positive Amazon reviews, Blumberg said, “I wouldn’t waste my money on that.”

“[Nebulized hypertonic saline] can be irritating,” she said. “It’s saltwater, essentially. If a parent is in the position where they’re worried about their child’s breathing to the point that they think they need to use it, I would err on the side of calling your pediatrician and being seen.”

Kusma said parents should seek medical attention if a child is breathing faster and working harder to get air. Increased work of breathing is characterized by pulling of the skin at the notch where the throat meets the chest bone (tracheal tugging), and flattening of the belly that makes the ribcage more prominent.

Mr Witt saw these signs in Sebastian. He knew they were significant, because a friend who is a nurse had previously shown him some examples of children who exhibited these symptoms online.

“That’s how I knew that things were actually really dangerous,” Mr Witt said. “Had she not shown me those videos a month and a half before this happened, I don’t know that we would have hit the alarm bell as quickly as we did.”

After spending their second night and the following day in a cramped preoperative room converted to manage overflow from the emergency department, Sebastian’s condition improved, and he was discharged. The Witts are relieved to be home, but frustrations from their ordeal remain, especially considering the estimated $5,000 in out-of-pocket costs they expect to pay.

“How is this our health care system?” Ms. Witt asked. “This is unbelievable.”

RSV seasons typically demonstrate a clear peak, followed by a decline through the rest of the season, suggesting better times lie ahead; however, this season has been anything but typical.

“I’m hopeful that it will just go away and stay away,” Kusma said, citing this trend. “But I can’t know for sure.”

To anxious parents, Blumberg offered an optimistic view of RSV seasons to come.

“There’s hope,” he said. “There are vaccines that are being developed that are very close to FDA approval. So, it’s possible that this time next year, we might have widespread RSV vaccination available for children so that we don’t have to go through this nightmare again.”

Blumberg and Kusma disclosed no relevant conflicts of interest.