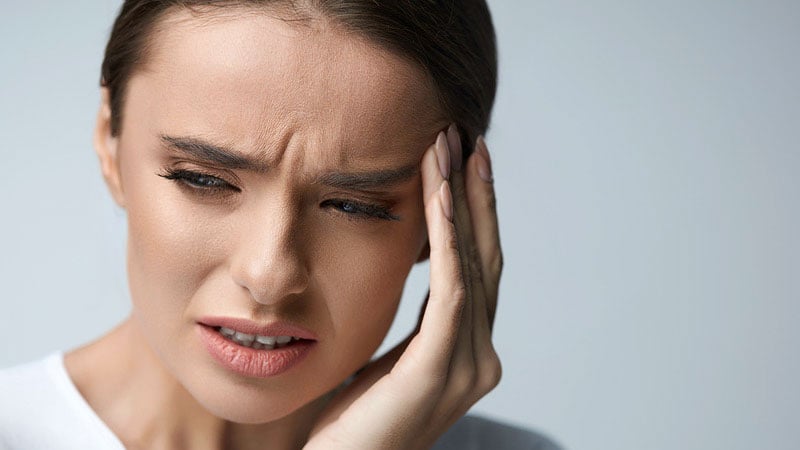 Atogepant, an oral, small-molecule, calcitonin gene–related peptide receptor antagonist that’s been in development as a preventive treatment for chronic migraine, has been found to have fewer side effects and similar hepatic function profile to standard of care oral treatment after 1 year of use, according to results of a multicenter, open-label trial presented at the 2021 annual meeting of the American Academy of Neurology.

The trial included 739 patients, 543 of whom were randomized to daily oral atogepant with the remainder assigned to the existing standard of care oral migraine prevention medication, said Messoud Ashina, MD, PhD, of the Danish Headache Center at the University of Copenhagen. Initially, 67% (n = 364) of the atogepant patients reported treatment-emergent adverse events (TEAEs). However, he noted, the rate of TEAEs related to treatment was actually 18% (n = 98), and the rate of serious AEs was 4.4% (n = 24); 31 patients (5.7%) discontinued therapy because of TEAEs.

In the atogepant group, the most common TEAEs were upper respiratory tract infection (10.3%, n = 56), constipation (7.2%, n = 39) and nausea (6.3%, n = 34). “With constipation in particular most cases were mild to moderate,” Ashina said. “Only one case was considered severe and it resolved before the end of the trial.” One patient discontinued treatment because of constipation.

Most significantly, said Ashina, “No hepatic safety issues were identified.” In the atogepant group, 2.4% of patients (n = 13) had ALT/AST levels at three times the upper limit of normal versus 3.2% (n = 6) in the standard of care group.

During question-and-answer, Ashina was pressed on the rate or urinary tract infections in the atogepant patients – 5.2% (n = 28), a measure not reported in the standard of care group – but he said there was no indication the UTIs resulted from atogepant itself. “I assume if there was some problems with urinary tract infections because of the kidneys then you would expect to see the lab data showing that,” he added in an interview. “There were no differences in lab abnormalities between the two groups.”

While Ashina said “I don’t think it’s something of concern” with regard to the UTI risk, he added: “It doesn’t mean that we don’t have to be careful. As physicians, we have to exhibit pharmacovigilance all the time, especially with the new drugs coming out over the next 5 years. But don’t panic.”

Stephen D. Silberstein, MD, director of the headache center at Thomas Jefferson University, Philadelphia, agreed that the hepatic values reported in the open-label trial are important. “What’s really nice about this study is the fact that we now know that this particular gepant when given on a regular basis for 1 year has no problem with liver or kidney function,” he said in an interview.

Ashina said once-daily oral atogepant could potentially be a desirable alternative migraine preventive treatment to monoclonal antibodies and their quarterly injections and a second-line therapy when other treatments don’t work. However, Silverstein noted that patients typically aren’t as compliant with self-administered oral medications as they are with periodic injections.