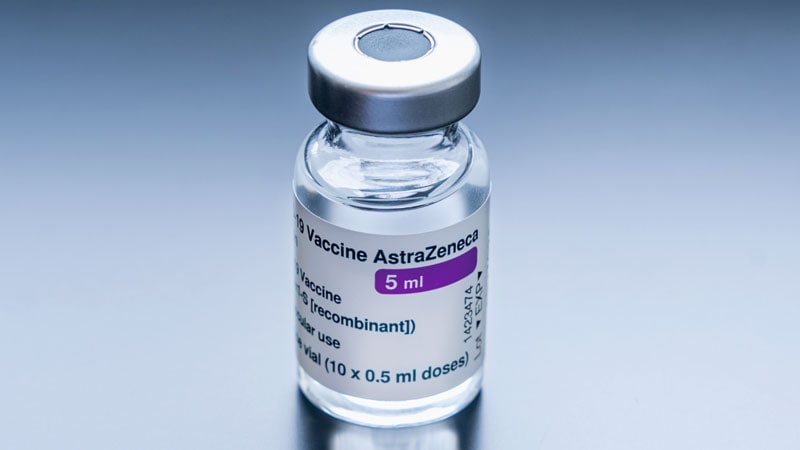 Scientists in Germany say they’ve worked out the two-step mechanism by which the Astrazenca vaccine causes rare but devastating blood clots that gobble up the body’s supply of platelets.

So far, European regulators have reported more than 220 cases of unusual blood clots and low levels of platelets in patients who received the vaccine, called Vaxzevria, which was developed with funding from Operation Warp Speed as part of the race to develop a suite of vaccines to protect people from COVID-19. Vaxzevria has not yet been authorized for use in the United States.

“This is, in my opinion, rock-solid evidence,” said Andreas Greinacher, MD, head of the Institute of Immunology and Transfusion Medicine, University Hospital Greifswald, Germany, who was among the first scientists in the world to link the rare clots to antibodies against the platelet factor 4 protein.

“This is what scientists usually think is confirmatory evidence,” he said in a call with reporters hours after publishing his study as a preprint ahead of peer review on the Research Square server.

Greinacher said he felt an urgent need to get the information out as soon as possible. He said his team had worked around the clock for 5 weeks to get answers, “because we are in the middle of the vaccination campaign. This was the driving force for us and the big motivation to provide these data as fast as any other possible,” he told reporters on the call.

“It’s very fascinating and provocative and a lot more questions than answers right now,” said James Zehnder, MD, director of the coagulation laboratory at Stanford University School of Medicine in California, who was not involved in the research.

Zehnder said the findings still need to be peer reviewed and confirmed by outside researchers.

“Maybe not all of it is correct, but I think that is the peer review process,” he said. “Research is iterative.”

Zehnder said some of the questions that still need to be answered include how common these reactions really are, and whether some of them are happening in less dramatic ways that aren’t yet being detected.

Greinacher said that he believes the mechanism linking the vaccine with the rare clotting reactions is likely to apply to other vaccines that also use adenoviruses to ferry instructions for making the virus’ spike protein into cells.

“My assumption is, and that’s a hypothesis, that this is a class effect of vaccines using adenovirus,” he said. He added that he could not be certain because he only studied reactions to the Vaxzevria vaccine. But previous studies have shown that adenoviruses can cause the type of platelet activation he saw in the reactions he studied.

Greinacher said that he had worked out an agreement with Johnson & Johnson (JOHNSON & JOHNSON)about an hour before the call to collaborate on studying its COVID-19 vaccine. The company had previously been unwilling to share information, he said.

While the reactions are extremely rare, they can be serious. One person, a 45-year-old woman in Virginia, has died. That led the US Centers for Disease Control and Prevention and the US Food and Drug Administration to call for a pause on administering the JOHNSON & JOHNSON vaccine last week. The company also announced that it would hold clinical trials to get more answers about the reactions.

In his new study, Greinacher and colleagues describe a cascade of events that has to happen in the body before the vaccines broker these large clots. He explained that while everyone has the basic immune machinery that leads to the unusual clots, it is almost always kept in balance. The body uses a series of checks to prevent any step in the process from getting out of control.

In some cases, however, there’s a perfect storm where each stage progresses to the next and the end result is very hard to control. That autoimmune attack, which causes the body to go into a hyper-clotting state, typically burns itself out after a few weeks. So if patients can get rapid treatment, the condition nearly always goes away.

He said he only knew of one case of an auto-immune syndrome like this lasting 10 years, but that was in a patient who had taken the blood thinner heparin, which can cause a nearly identical syndrome.

In the first step, the adenovirus shell in the vaccine, along with proteins from the cells where the vaccine is grown, come into contact with platelets from the blood.

Platelets are best known as colorless cell fragments that rush to the site of an infection or injury, helping the blood congeal to stop bleeding; they also play a key role in the body’s immune response.

When activated, they surround invaders like bacteria and change shape to release chemical signals they store in granules.

When platelets are activated en masse, as can happen rarely after a person takes the blood thinner heparin or gets the Vaxzevria vaccine, they release a flood of these signals, Greinacher explained. These blaring signals recruit an ancient and hard to control branch of the immune response.

“Imagine this like a dragon in the cave who was sleeping for a long time [but] which now got alerted by someone’s throwing a stone on it,” he said. The chemical signals awaken B-cells which then produce massive amounts of antibodies against the platelet factor 4 protein, which helps coordinate blood clotting.

The body erroneously thinks it is ‘reacting to massive amounts of pathogens in the body, so the immune system overshoots. The antibodies bind the platelets, the platelets recruit white blood cells, and “then the whole thing is exploding,” he said.

The second key step important in these reactions is caused by EDTA, a calcium-binding agent and stabilizer that is’ added to the Vaxzevria vaccine.

EDTA is not listed as an ingredient in the Johnson & Johnson vaccine.

EDTA opens junctions between cells that form the walls of blood vessels, causing them to become leaky. This allows the giant complexes formed by proteins and platelets to enter the blood circulation, where they—on very rare occasions — trigger that bodywide alarm.

Asked if he thought there was anything that could be done to make the vaccine safer, Greinacher said his first thought would be to try to get rid of the EDTA, which causes the second step in the process. But he said he was not a vaccine developer and didn’t know how important it might be to its formulation.

Why might the Johnson & Johnson vaccine lead to similar types of clots, even though it doesn’t contain EDTA? Greinacher speculated that size might play a role.

When this reaction occurs in patients who have taken heparin, the size of the heparin molecule matters. With unfractionated heparin, the longest kind of molecule, the reaction is 10 times more common than when patients take smaller low-molecular weight heparins.

As for why the reaction appeared to be more common in women, Greinacher said he was growing skeptical that there is a large gender bias. He pointed out that most of the first vaccine recipients in Europe had been healthcare workers, who are disproportionately women.

He noted that women might be slightly more susceptible because of hormones and because women are more likely to develop autoimmune disease, but that the risk was probably more balanced between men and women than it first seemed.

“It’s not a disease of young women,” he said.

Several European countries have changed or abandoned their use of the AstraZeneca vaccine.

Last week, Denmark said it would no longer include Vaxzevria as part of its vaccination program. Italy has recommended thatAstraZeneca vaccine only be used in people over age 60. UK officials said people under age 30 should be offered an alternative.

Meanwhile, the European Medicines Agency said a warning about the risk of blood clots and low platelets should be added to product information for the Johnson & Johnson vaccine.