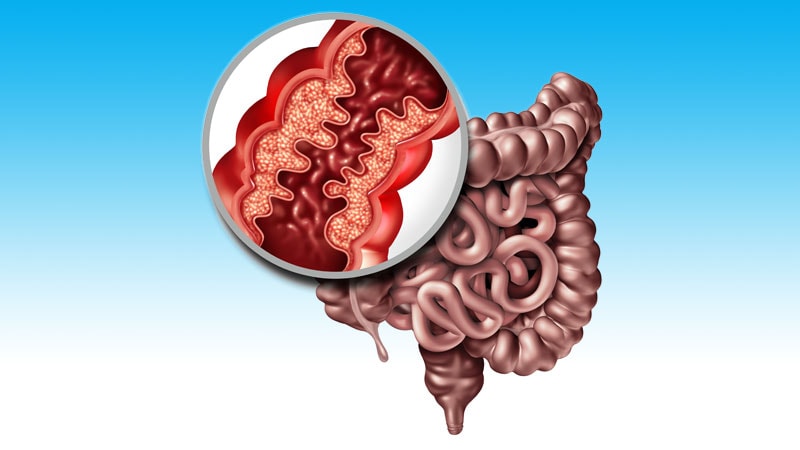 For biologic-naive adults with moderate to severe Crohn’s disease, treatment with adalimumab or ustekinumab leads to similar outcomes, according to results of the head-to-head SEAVUE trial.

When lead author Bruce E. Sands, MD, of Icahn School of Medicine at Mount Sinai, New York, compared treatment arms, patients had similar rates of clinical remission at one year. All major secondary endpoints, such as endoscopic remission, were comparable, as were safety profiles, Sands reported at the annual Digestive Disease Week® (DDW).

“From my perspective, this is an important study,” Sands wrote in a virtual chat following his presentation. “We need more head-to-head studies!”

Results from the SEAVUE trial come almost 2 years after Sands reported findings of another head-to-head IBD trial: VARSITY, which demonstrated the superiority of vedolizumab over adalimumab among patients with moderate to severe ulcerative colitis.

The multicenter, double-blinded SEAVUE trial involved 386 patients with biologic-naive Crohn’s disease who had failed corticosteroids or immunomodulators. All patients had Crohn’s Disease Activity Index (CDAI) scores ranging from 220 to 450 and had at least one ulcer detected at baseline ileocolonoscopy.

Participants were randomized in a 1:1 ratio to receive monotherapy with either subcutaneous adalimumab (citrate-free; 160 mg at baseline, 70 mg at week 2, then 40 mg every 2 weeks) or ustekinumab, which was given first intravenously at a dose of 6 mg/kg then subcutaneously at 90 mg every 8 weeks.

Results were statistically similar across all endpoints, with clinical remission at 1 year occurring in 64.9% and 61.0% of patients receiving ustekinumab and adalimumab, respectively (P = .417).

“Both treatments demonstrated rapid onset of action and robust endoscopy results,” Sands noted during his presentation; he reported comparable rates of endoscopic remission, at 28.5% and 30.7% for ustekinumab and adalimumab, respectively (P = .631).

Safety metrics were similar between groups, and consistent with previous experience. Although the adalimumab group had a higher rate of discontinuation due to adverse events, this trend was not statistically significant (11.3% vs. 6.3%; P value not provided).

Jordan E. Axelrad, MD, assistant professor of medicine at NYU and a clinician at the Inflammatory Bowel Disease Center at NYU Langone Health, New York, commended the SEAVUE trial for its head-to-head design, which is a first for biologics in Crohn’s disease.

“With newer drugs, there’s a critical need for head-to-head studies for us to understand where to position a lot of these agents,” he said in an interview. “[T]his was a good undifferentiated group to understand what’s the first biologic you should use in a patient with moderate-to-severe Crohn’s disease. The primary, major take-home is that [ustekinumab and adalimumab] are similarly effective.”

When asked about the slight superiority in minor secondary endpoints associated with ustekinumab, Axelrad suggested that rates of discontinuation deserve more attention.

“For me, maybe the major focus would be on the number of patients who stopped treatment,” Axelrad said, noting a higher rate of discontinuation in the adalimumab group. “Although that was just numerical, that to me is actually more important than [the minor secondary endpoints].” He also highlighted the lower injection burden associated with ustekinumab, which is given every 8 weeks, compared with every 2 weeks for adalimumab.

Ultimately, however, it’s unlikely that treatment sequencing will depend on these finer points, Axelrad suggested, and will instead come down to finances, especially with adalimumab biosimilars on the horizon, which may be the most cost-effective.

“A lot of the decision-making of where to position [ustekinumab in Crohn’s disease] is going to come down to the payer,” Axelrad said. “If there was a clear signal, providers such as myself would have a better leg to stand on, like we saw with VARSITY, where vedolizumab was clearly superior to adalimumab on multiple endpoints. We didn’t see that sort of robust signal here.”

The SEAVUE trial was supported by Janssen Scientific Affairs. Sands disclosed relationships with Janssen, AbbVie, Takeda, and others. Axelrad disclosed previous consulting fees from Janssen and research support from BioFire.

This article originally appeared on MDedge.com , part of the Medscape Professional Network.

COVID-19 Vaccine DSMB can serve as model for future situations
578,555 People Have Died From COVID-19 In The US, Or Maybe It’s 912,345 – Here’s Why It’s Hard To Count
How Effective Was the Latest COVID Vaccine Candidate?
After Struggling With Chronic Illnesses Most of Her Life, This Author Wrote a Children’s Book About Her Inspiring Service Dog
Best Pediatric Endocrinology Hospitals; Standards of Diabetes Care Updated