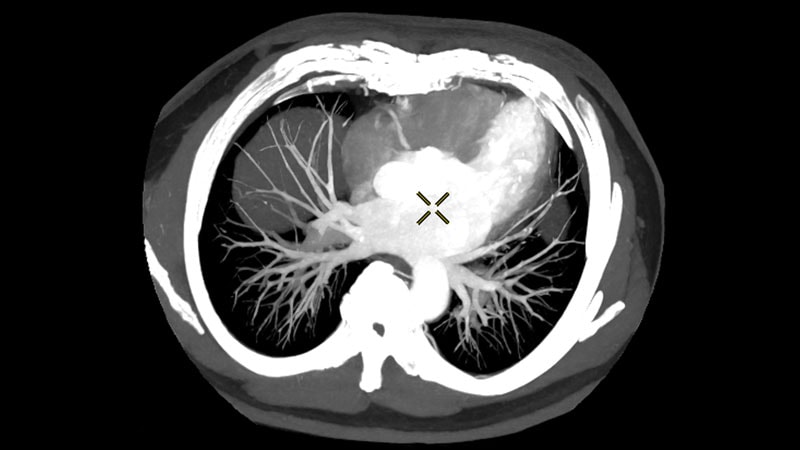 Authors of a new South Korean study recommend the use of steroids and antihistamines to prevent recurrences of delayed allergic reactions to a form of radiocontrast media (RCM) used in imaging such as CT scans.

“Our study revealed that pharmacological prevention using steroids and/or antihistamines was effective in most patients, except in a few with severe previous reactions,” they write. Their findings were published online July 1 in the World Allergy Organization Journal.

According to the study, which was led by Prof Jung-Hyun Kim, Seoul National University College of Medicine, Seoul, Republic of Korea, both immediate (within 1 hour) and delayed (after 1 hour) allergic reactions to RCM can occur following imaging procedures. In delayed reactions, mild maculopapular exanthema — a form of rash — is most common. Hives can also occur, and there are rare cases of drug-related eosinophilia, systemic symptoms, Stevens-Johnson syndrome, and toxic epidermal necrolysis.

“Most of these reactions are thought to be due to T cell–mediated mechanisms, and positive skin patch tests and lymphocyte transformation tests support this pathogenesis,” the study authors write. Most cases are mild and resolve on their own or with medication.

The authors launched the study to test strategies to prevent recurrence in patients who need more imaging. They retrospectively analyzed the medical records of 117 patients (mean age, 56.5 ± 12.5 years; 68% women) who sought to prevent recurrence of delayed allergic reactions after exposure to non-ionic, low-osmolar RCM.

The patients received steroids either before the imaging procedures, afterward, or both. Most received intravenous methylprednisolone 20 or 40 mg 1 hour before exposure. Most patients also received antihistamines to prevent pruritis.

Symptoms improved in 98% of 101 patients whose records were deemed appropriate for inclusion in the study. Symptoms worsened in only one patient.

Seventy patients had no allergic reactions. The 31 who did experience reactions were more likely to be older and female and to have had more severe symptoms previously. “The severity of the prior reaction was the most critical factor in determining the outcome of preventive measures, although the majority of patients with severe previous reactions showed favorable responses to the prevention,” the authors write.

The researchers note several limitations to the study. There was no control group, although the authors point out that “it is difficult to re-administer RCM without any preventive measures in patients who had previously experienced hypersensitivity to RCM.” In addition, reactions were not diagnosed via patch tests, in vitro tests, or intravenous provocation.

The researchers note that a recent recommendation suggests that for patients who have experienced allergic reactions, skin tests can be helpful before they undergo more imaging. These tests can provide guidance as to whether patients can tolerate alternative forms of imaging.

The study authors also note that steroids can cause adverse effects. “However,” they write, “the total amount of steroids prescribed to patients was similar to the amount generally recommended for premedication for immediate RCM hypersensitivity reactions.”

Study co-author Sae-Hoon Kim, MD, of Seoul National University Bundang Hospital, said in an interview with Medscape Medical News that the best approach is still to avoid RCM after a patient experiences a delayed allergic reaction. “However, if use of RCM is clinically [necessary] for diagnostic and therapeutic purpose, I would recommend giving steroids prior to exposure. Giving steroid afterwards would be optional for patients with a severe previous reaction or patients who had a breakthrough reaction even after premedication.”

In an interview with Medscape, immunologist Jonathan A. Bernstein, MD, professor of medicine at the University of Cincinnati, in Cincinnati, Ohio, said the new study is limited but useful. He was not involved in the study.

For patients who have previously experienced a delayed allergic reaction to RCM, Bernstein recommends pretreatment with 50 mg of prednisone 13 hours, 7 hours, and 1 hour before the procedure. However, there’s an absolute contraindication for patients who experienced Stevens-Johnson syndrome or toxic epidermal necrolysis after previous exposure, he said. For them, alternative imaging approaches are necessary.

No study funding was reported. The authors and Bernstein report no relevant financial relationships.

Ask the experts: suicide
Adequate communication and support needed for children of cancer patients, research suggests
My Journey to the Root of Empathy
C auris Transmission Can be Contained in Postacute Care Settings
Theranos whistleblower testifies blood-test machines were about as accurate as a coin toss