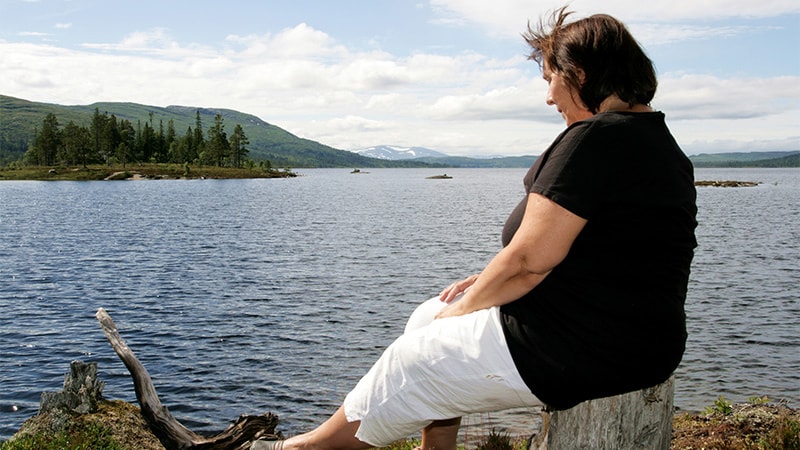 Treatment of people with obesity but no diabetes with the dual incretin agonist tirzepatide safely produced “unprecedented” levels of weight loss in the vast majority of patients in SURMOUNT-1, a placebo-controlled trial with more than 2500 people with obesity or overweight plus at least one weight-related complication.

Although the pivotal trial did not directly compare weekly subcutaneous injection with the twincretin tirzepatide (at 5 mg, 10 mg or 15 mg) with either bariatric surgery or what has been the reigning champ of weight-loss agents, a 2.4 mg/week injection of semaglutide (Wegovy), the new findings are impressive because they eclipsed semaglutide’s past performance in at least three important ways, said Ania M. Jastreboff, MD, PhD, SURMOUNT-1’s lead investigator, at the annual scientific sessions of the American Diabetes Association.

First, the highest tested dosage of tirzepatide, 15 mg/week, for 72 weeks, produced a 5% or greater loss in baseline weight in 91%-96% or patients, an effect “not previously seen” in any prior phase 3 trial of a weight-loss agent, noted Jastreboff, an endocrinologist and director of Weight Management & Obesity Prevention at Yale School of Medicine in New Haven.

Second, the average level of weight loss among the 630 people who received 15 mg/week was 22.5% in the on-treatment analysis, and 20.9% in the intention-to-treat analysis, again a magnitude of effect never before seen with any other medical intervention.

And in an exploratory analysis, 40% of people who received the highest-tested tirzepatide dose of 15 mg/week had at least a 25% loss in baseline weight in the on-treatment analysis, another example of unprecedented weight-loss achievement, said Jastreboff.

Looking at the data another way, the average baseline weight of those in the trial was 104 kg (230 lb) at the start, and the average weight loss was between 35-52 lbs by 72 weeks on treatment, Jastreboff told a press conference here.

She noted however that not everyone will respond to tirzepatide, “but if you do respond to this medicine, you will feel full earlier, you won’t want to go back for seconds and you may eat smaller amounts more often.”

Such weight loss agents will need to be taken chronically, in the same way that medications are for hypertension, or dyslipidemia, Jastreboff stressed. “If you stop the anti-obesity medication then the body fat mass setpoint will go back up so this necessitates long-term treatment.”

A New Era: Weight Loss “in the Range of Bariatric Surgery”

Tirzepatide, developed by Lilly, has recently been approved in the US for the treatment of type 2 diabetes, under the brand name Mounjaro.

SURMOUNT-1 was designed to examine the effect of the agent in overweight/obesity and the company will be filing for the additional indication of weight loss in the future. Topline results of SURMOUNT-1 generated much excitement when Lilly reported them back in April, including a story in The New York Times.

Semaglutide, a Novo Nordisk drug, is approved in the US for type 2 diabetes (as Ozempic at doses of either 1 mg or 2 mg per week) and also, for weight loss, as Wegovy, at the higher dose of 2.4mg per week. When Wegovy was given the green light by the FDA a year ago, it too was hailed as a “gamechanger” for obesity.

The weight loss results seen in SURMOUNT-1 “put tirzepatide squarely in the range of weight loss achieved with bariatric surgery,” concluded Louis J. Aronne, MD, a co-investigator on the trial, professor at Weill-Cornell Medical College in New York, and director of the Center for Weight Management and Metabolic Clinical Research of Weill-Cornell.

The results are “amazing,” and propel the weight-loss field into “a new era of obesity treatment,” commented Lee M. Kaplan, MD, who was not involved in the study and served as designated discussant for the trial.

Despite the lack of direct comparison, the findings indicate that “tirzepatide causes more weight loss than semaglutide,” and it provides “an opportunity to meet or exceed” the weight loss effects of bariatric surgery, added Kaplan, director of the Obesity, Metabolism and Nutrition Institute at the  Massachusetts General Hospital in Boston.

Simultaneously with Jastreboff’s report at the meeting, the results were published online in The New England Journal of Medicine.

An accompanying editorial, agrees with Kaplan: “It is remarkable that the magnitude of weight loss with tirzepatide was similar to that with gastric bypass, which raises the potential for alternative medical approaches to the treatment of obesity.”

“The tides are shifting, and there are now more options for people with obesity to lose weight,” write Clifford J. Rosen, MD, of Tufts University School of Medicine, Boston, and Julie R. Ingelfinger, MD.

Tirzepatide is the first agent on the US market from a novel class of dual-incretin agonists, with a molecular structure engineered to activate both the glucagon-like protein-1 (GLP-1) receptor and the glucose-dependent insulinotropic polypeptide (GIP), the two predominant incretins in the human gut. This combined activity has led to the twincretin nickname for tirzepatide.

Semaglutide is a single-incretin agonist, with its activity focused exclusively on the GLP-1 receptor.

Aronne tied the apparently superior efficacy of tirzepatide relative to semaglutide directly to the added incretin activity of tirzepatide. “The dual approach enhances efficacy,” he proposed during his presentation at the meeting.

The impressive efficacy and reassuring safety profile reported from SURMOUNT-1 opens the door to a new approach to treating obesity, which in the past has often taken a back seat to treatments for dyslipidemia, hypertension, and diabetes.

Jastreboff agreed: “Perhaps we can prevent diabetes by treating obesity head-on,” she remarked.

There have been concerns about patient access to these newer weight loss drugs in the United States, given that the retail cost of semaglutide for obesity exceeds $1000/month, but Aronne reported data that painted a more optimistic picture.

His numbers showed that during the first months that semaglutide was on the US market as a weight loss agent, the number of US prescriptions written for branded anti-obesity medications roughly doubled, a spike that seemed mostly driven by the introduction and growing use of semaglutide.

With tirzepatide, every prespecified cardiometabolic parameter assessed in the trial showed clinically meaningful improvements, reported Jastreboff, including an average 17% reduction in waist circumference in patients on either of the highest two dosages, a 34% average drop in total fat mass, an average 0.5 percentage point cut in baseline A1c at the highest two dosages, substantial cuts in fasting plasma glucose and fasting insulin levels,  an average 28% drop in triglyceride levels, and an average systolic blood pressure reduction of about 8 mm Hg that occurred within 24 weeks on treatment.

“I think that insurers will sign up” for tirzepatide coverage based on benefits like this, Aronne predicted.

SURMOUNT-1 randomized 2539 patients with obesity or with overweight plus at least one weight-related complication at any of 119 sites in nine countries. They had a body-mass index (BMI) of 30 kg/m2 or more, or 27 kg/m2 or more and at least one weight-related complication, excluding diabetes. They were randomized, in a 1:1:1:1 ratio, to receive once-weekly, subcutaneous tirzepatide (5 mg, 10 mg, or 15 mg) or placebo for 72 weeks, including a 20-week dose-escalation period.

The study’s two primary endpoints were the average percentage change in body weight from entry to 72 weeks, and the percentage of participants reaching at least a 5% reduction in their baseline body weight by 72 weeks.

The most common adverse events with tirzepatide were gastrointestinal, and most were mild to moderate in severity, occurring primarily during dose escalation. Adverse events caused treatment discontinuation in 4.3%, 7.1%, 6.2%, and 2.6% of participants receiving 5-mg, 10-mg, and 15-mg tirzepatide doses and placebo, respectively

The trial ran from December 2019 to April 2022, so during the peak of the COVID-19 pandemic, which Jastreboff described as an “amazing feat.”

Jamy Ard, MD, who chaired the SURMOUNT-1 session quipped, after hearing the results, “Wow; that’s exciting. If you’re not excited by the results, you’d better check your pulse.”

Ard is a professor at Wake Forest University School of Medicine and co-director of the Wake Forest Baptist Health Weight Management Center.

Mitchel L. Zoler is a reporter for Medscape and MDedge based in the Philadelphia area. @mitchelzoler