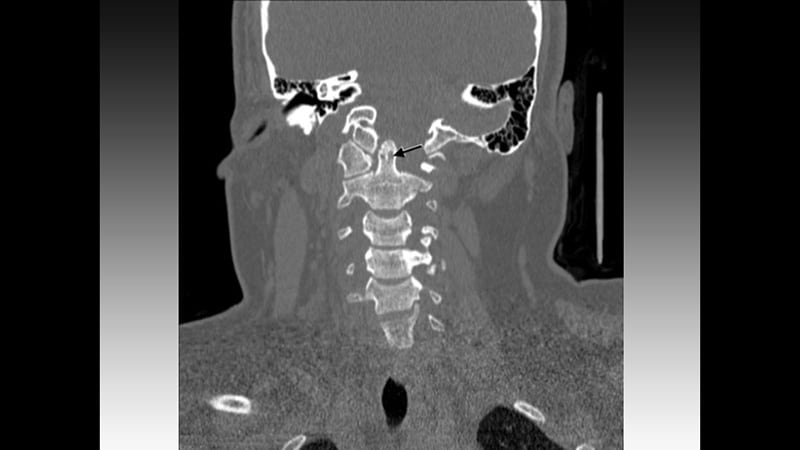 According to data from the German Spondyloarthritis Inception Cohort (GESPIC), it could take 2-4 years after the initiation of TNF inhibitor treatment before x-rays will show any sign of a benefit in either the spine or sacroiliac joints (SIJ).

“The association between anti-TNF treatment and the retardation of radiographic spinal progression in spondyloarthritis appears to be time-shifted,” GESPIC study investigator Denis Poddubnyy, MD, said at the annual European Congress of Rheumatology.

Reporting the spinal findings, Poddubnyy, who is head of the rheumatology department at Campus Benjamin Franklin of the Charité University Hospital in Berlin noted that “at least 4 years of observation is required” to see an effect of TNF inhibitors on new bone formation. “This might be related to the intermediate and long-lasting process of bone repair that follows the resolution of inflammation and precedes the development of new bone,” he suggested.

The effect on the SIJ may precede the spinal damage, so it’s important to look at how anti-inflammatory treatment might affect the SIJ, Poddubnyy said in an interview. Results from the SIJ analysis, which were presented by Murat Torgutalp, MD, suggested that there might be a 2-year time lag between TNFi treatment and being able to see something on x-rays.

“Everybody in the past focused on the spine, considering that spinal changes are functionally more relevant than changes in the SIJ,” Poddubnyy observed.

Structural damage in the spine and SIJ in radiographic axSpA probably occur by different processes, he explained. While it’s more to do with new bone formation in the spine, it’s more to do with erosive damage followed by repair in the SIJ. “It is very likely that in the majority of patients we see that those two processes are somehow disconnected in time,” he suggested.

The GESPIC cohort provides a good base from which to examine the effects of TNF inhibitors on radiographic progression in patients with axSpA for several reasons, observed Poddubnyy. For one it was established in 2000, so “well before the introduction of TNF-alpha inhibitors.” That means that almost all patients would have been put on TNF inhibitors while enrolled in the cohort, he said, “so we could really follow up them prospectively for a few years.” In fact, just nine patients had been treated with TNF inhibitors at baseline.

Although TNF inhibitors are widely accepted to be effective anti-inflammatory drugs that can relieve patients’ spinal symptoms, there were inconclusive data on whether they can also have an impact on radiographic progression.

To look at the possible immediate or later effect of TNF inhibitors on spinal radiographic progression, the GESPIC investigators looked at sets of radiographs, taken at least 2 years apart over a 10-year period, from 266 patients, 77 of whom who had been treated with a TNF inhibitor for at least 12 months or more. Overall, there were 103 2-year intervals covered by TNF inhibitor treatment of any duration, and 78 intervals in which treatment had lasted for at least 12 months.

“This cohort included patients with quite early disease, including both nonradiographic and radiographic forms,” Poddubnyy said, adding that some patients had been treated with a TNF inhibitor for up to 10 years.

While there were no significant changes in radiographic progression as measured using the modified Stoke Ankylosing Spondylitis Spine Score (mSASSS) between patients who had and who had not received at least 12 months’ TNF inhibitor therapy in the first 2 years, there was a substantial difference after 4 years.

“Our interpretation is that within the first 2 years we see a resolution of inflammation, a process of repair, maybe even a process of bone formation, but then if you continue this inflammation control for longer than 2 years, then we see the effect on structural damage,” Poddubnyy said.

The SIJ analysis included 301 patients who had at least two sets of radiographs taken every 2 years over a 10-year follow-up period, 87 (28.9%) of whom had been treated with at least one TNF inhibitor during follow-up.

Radiographic SIJ progression was defined as the change in the sacroiliitis sum score over 2 years. Calculations considered both the current 2-year period and the previous 2-year period, as well as any use of TNF inhibitors or more than 12 months’ use.

There were no significant differences in sacroiliitis sum scores comparing people who were and were not treated with TNF inhibitors for at least 12 months in the current 2-year period. However, when the previous 2-year period was looked at there was a significant difference in the score between those who had and had not been treated for 12 or more months (0.15 vs. 0.27, respectively; P = .024).

“If we control inflammation, we might control structural damage progression,” Poddubnyy said.

If this is the case, then it is likely that other drugs that control inflammation in axSpA will have a similar effect, such as those that target interleukin-17 or Janus kinases. This is something in the future to look at in the GESPIC cohort once enough patient-years of data are available.

Early treatment is probably important, Poddubnyy suggested, “because in patients with early disease we can expect not that much structural damage at baseline.” Starting treatment early, at the inflammatory stage rather than at the stage where there was a lot of damage already there, could yield better results, he proposed.

“As a clinician, as a researcher, I would be really interested in demonstrating in a prospective, clinical trial that treating patients to target, achieving a remission, would be associated with retardation of structural damage progression. This has only been shown in observational studies so far, so this is an open question.”

Questions on Adjustments Made for Confounding Factors

Questions on the spinal presentation included whether there were any differences in NSAID use, to which Poddubnyy responded, “Patients on TNF inhibitors normally reduce NSAIDs. We adjusted, therefore, for NSAID use.”

The SIJ presentation garnered more questioning. Torgutalp qualified that both radiographic and nonradiographic patients had been included in the analysis, and “we observe the same effect.”

Asked how clinically relevant the findings were, he noted that, “to the best of our knowledge, this is the first data for sacroiliac joint progression.” The data for spinal progression seem to “reconcile the results from previous investigators,” where there had been some conflicting data on whether 2 or 4 years’ TNF-inhibitor therapy had any effect on radiographic progression.

This is not something that was adjusted for, Torgutalp conceded. “We will do it for further analysis,” he said.

Since 2010, GESPIC has been supported by grants from AbbVie. Poddubnyy reported financial relationships with AbbVie and numerous other pharmaceutical companies. Torgutalp had no relevant disclosures.