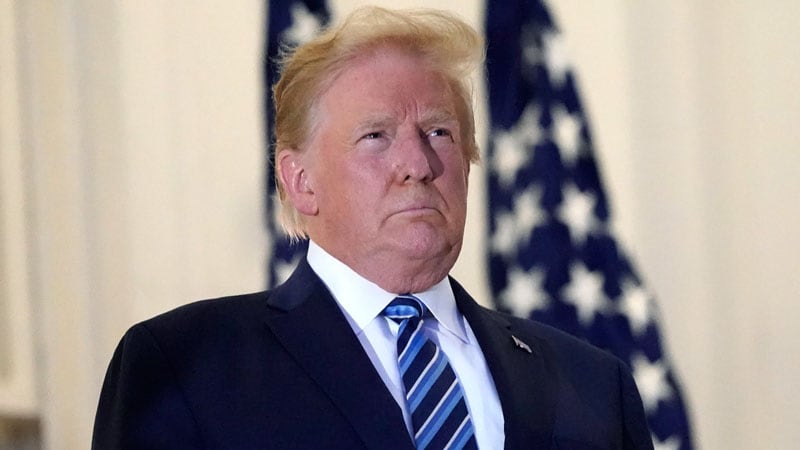 President Donald Trump is “no longer considered a transmission risk to others” for the coronavirus, according to a memo from his doctor released on Saturday night.

“This evening I am happy to report that in addition to the president meeting CDC criteria for the safe discontinuation of isolation, this morning’s COVID PCR sample demonstrates, by currently recognized standards, he is no longer considered a transmission risk to others,” Conley wrote.

The wording seems unusual, several doctors and scientific experts told The New York Times and other news outlets. The memo doesn’t explicitly say Trump tested negative for the virus, and no current test can definitively say whether someone with COVID-19 is still contagious or poses a transmission risk to others.

However, some tests can show how much virus remains in the body, so the memo may indicate that Trump’s viral load for the coronavirus is small but still detectable, the newspaper reported.

“In addition, sequential testing throughout his illness has demonstrated decreasing viral loads that correlate with increasing cycle threshold times, as well as decreasing and now undetectable sub-genomic mRNA,” Conley wrote.

Sub-genomic mRNA molecules can be detected through certain lab techniques and may indicate whether the virus is actively replicating, according to CNN. No current tests that are cleared for use can detect this part of the mRNA, so an experimental test may have been used to look for the molecules.

Based on CDC guidance, people who test positive for COVID-19 aren’t infectious anywhere from 10-20 days after symptoms begin. Those who have severe cases of the disease should isolate for the longer period of 20 days, according to The Associated Press.

Since Trump was given dexamethasone, a steroid usually administered to patients with severe COVID-19, infectious disease specialists have questioned whether he had a severe case. However, White House doctors may have monitored Trump’s viral load to determine when he could resume activities, the AP reported.

“Now at day 10 from symptom onset, fever-free for well over 24 hours and all symptoms improved, the assortment of advanced diagnostic tests obtained reveal there is no longer evidence of actively replicating virus,” Conley said.

The memo was released a few hours after Trump spoke from the White House balcony to a group of people gathered for an event on the South Lawn. Saturday’s appearance was the first time Trump had been seen publicly since he was released from the hospital at the beginning of the week.

Trump is scheduled to resume in-person campaign events, starting with a speech in Florida on Monday. Conley will continue to monitor Trump as he “returns to an active schedule,” according to the memo.

CNN, “Trump has met CDC criteria to end isolation and is cleared to return to an active schedule by his physician.”

Ondansetron use associated with increased survival in mechanically ventilated COVID-19 patients
Is there a link between SARS-CoV-2 and Guillain-Barre syndrome?
Dupilumab Improves Lung Function for Kids With Asthma
Why Toilet Paper Is the Unofficial Symbol of Anxiety During COVID
AI-based technology rapidly identifies genetic causes of rare disorders with high accuracy