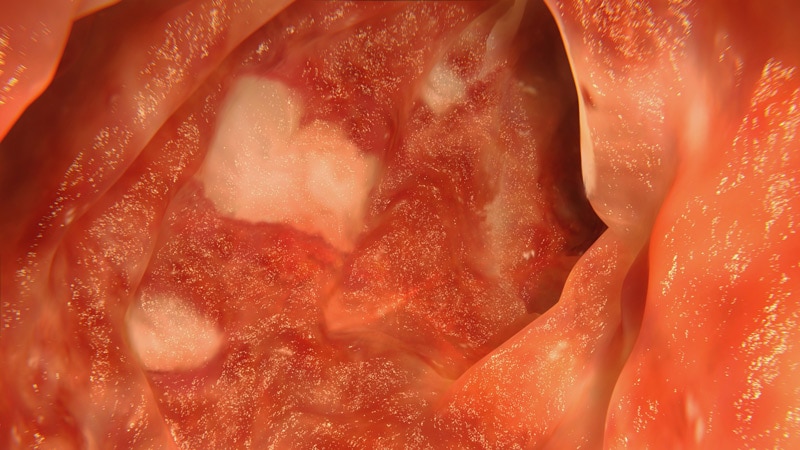 In patients with moderate to severe ulcerative colitis (UC), treatment with vedolizumab leads to better histologic outcomes than treatment with adalimumab, according to findings from the VARSITY trial.

The findings come from an analysis in Gastroenterology of prespecified histologic exploratory endpoints from the phase 3, multicenter, randomized, controlled VARSITY trial, which was the first head-to-head comparison of two biologics in the treatment of UC. VARSITY demonstrated improved rates of clinical remission and endoscopic improvement at week 52 with vedolizumab.

The authors, led by Laurent Peyrin-Biroulet of the department of gastroenterology at Nancy (France) University Hospital, noted that there is general consensus that endoscopic improvement is considered the best endpoint for demonstrating effective maintenance therapy in UC.

However, they added that “endoscopic changes do not necessarily reflect quiescent microscopic disease, and complete resolution of mucosal inflammation can only be confirmed by histologic assessment.” Still, histologic outcomes are not currently recommended as a goal of therapy in clinical practice, possibly due to a lack of standardized and validated scoring systems suitable for routine clinical use. Nevertheless, histologic outcomes have been shown to predict hospitalization, corticosteroid use, exacerbation, and the risk of advanced colorectal neoplasia.

During the 52-week study, 769 patients were assigned to vedolizumab (300 mg IV) or adalimumab (40 mg subcutaneously).

The investigators performed post hoc analyses of mucosal healing, defined as a composite of the histologic and endoscopic outcomes, with the latter defined as Mayo endoscopic subscore of 1 or less. A greater proportion of patients treated with vedolizumab than with adalimumab met the composite of histologic remission on each score plus endoscopic improvement (Geboes, 35.0% vs. 20.2%; RHI, 33.7% vs. 18.1%), with similar findings for minimal histologic disease activity plus endoscopic improvement (Geboes, 35.0% vs. 20.2%; RHI, 33.7% vs. 18.1%).

The authors noted that the RHI scoring system revealed greater associations between histologic outcomes and endoscopic improvement than did the Geboes Index score, which is an important finding considering the European Crohn’s and Colitis Organisation’s stance recommending consideration of mucosal healing based on findings from endoscopy and histology.

Some study limitations included how the study design precluded dose escalation and a lack of long-term follow-up among these patients.

The researchers believe that the RHI score may be a better choice than the Geboes score for comparing efficacy in clinical trials because RHI is more reproducible, more sensitive to change, and is comparatively easy to interpret.

The study was funded by Takeda, which makes vedolizumab. The authors disclosed several relationships with industry, including some having stock options with or being employed by Takeda.

Researchers report six stages of engagement in treatment of ADHD
Flight attendants fear being ‘punched in the face’ over mask enforcement, union president says
How can breathwork improve our wellbeing?
Tackling Grief, Loss in Patients With Advanced Lung Cancer
Morning sickness at night