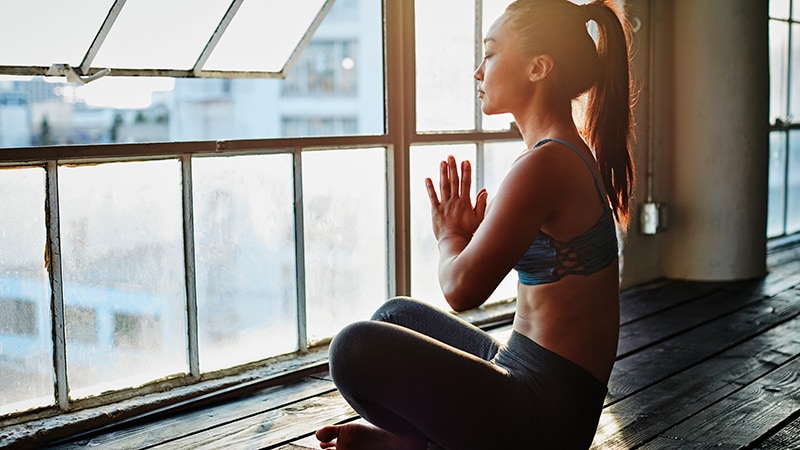 Yoga added to conventional therapy for vasovagal syncope (VVS), when patients faint after a sudden drop in heart rate and blood pressure, can reduce symptoms and improve quality of life, new research suggests.

A small, open-label trial conducted in New Delhi, India, showed that participants practicing yoga reported an improvement in VVS symptoms after only 6 weeks, with a reduction of 1.82 events at 12 months. All those practicing yoga also showed significantly improved quality of life (QoL) scores by the end of the trial.

“Yoga as add-on therapy in VVS is superior to medical therapy in reducing syncopal and presyncopal events and in improving the QoL,” report Gautam Sharma, MD, DM, Centre for Integrative Medicine and Research, All India Institute of Medical Sciences, New Delhi, and colleagues. “It may be useful to integrate a cost-effective and safe intervention such as yoga into the management of VVS.”

Results of the LIVE-Yoga study were published online in JACC: Clinical Electrophysiology.

Vasovagal syncope is a common and non–life-threatening condition, but given the severity and frequency of recurrence it can result in significant deterioration in a patient’s quality of life, the authors note. “Existing management therapies have been largely ineffective,” they write.

Recent trials have suggested some efficacy for yoga in diseases of autonomic imbalance, suggesting a possible use in VVS. To find out, the researchers enrolled adults with VVS between the ages of 15-70 years who had a positive head-up tilt test (HUTT) and at least two syncope or presyncope events within 3 months of enrollment. They also needed to be willing and able to practice yoga. Those with structural heart disease, accelerated hypertension, and underlying neurologic disorders were not included in the study.

A total of 55 patients were randomly assigned to receive either a specialized yoga training program in addition to guideline-based therapy, or guideline-based therapy alone. Standard care included physical counterpressure maneuvers, avoidance of known triggers, increased salt and water intake, and drug therapy or pacing at the discretion of the treating physician.

The primary outcome was a composite of the number of episodes of syncope and presyncope at 12 months.

For the first 2 weeks, patients in the intervention group were enrolled in eight supervised yoga sessions conducted at the Centre for Integrative Medicine and Research at the All India Institute of Medical Sciences. For the remainder of the trial, they continued a daily yoga practice at home at least 5 days a week.

The yoga module created for participants was designed with a view to the pathophysiology of VVS and featured postures, breathing, and relaxation techniques. Yoga classes were taught by qualified therapists under the guidance of physicians.

In addition to a booklet with a pictorial of the yoga regimen, participants received twice-monthly calls from the yoga center to encourage compliance. Results shows that all participants adhered to their yoga routine for more than 80% of the 12-month trial.

At 12 months, the mean number of syncopal or presyncopal events was 0.7 ± 0.7 with the yoga intervention vs 2.52 ± 1.93 among patients in the control arm. (P < .05). The reduction in events started as early as 6 weeks, and continued to separate out to 12 months, the researchers note.

Thirteen of 30 (43.3%) intervention patients and 4 of 25 (16%) control patients remained event-free at 12 months, a statistically significant difference. (P = .02). There was a trend toward fewer positive head-up tilt tests between groups that did not reach significance, and there was no difference in heart rate variability at 6 weeks.

No adverse events as a result of the yoga practice were reported, and no patient started drug therapy or received pacing therapy during the trial, they note.

The researchers point out that yoga postures can enhance vascular and muscle tone, especially in the lower limbs.

“Yoga breathing and relaxation techniques have been shown to increase vagal tone and improve autonomic balance, which could potentially curtail the sympathetic overdrive phase and interrupt the activation of the c-mechanoreceptors, which is a critical step in the syncope cascade,” they note.

“We postulate that positive effects of yoga in this study could be related to a multidimensional effect of this intervention acting through both central and peripheral mechanisms, including physical, psychological, and autonomic pathways,” the authors conclude.

“All of this clearly shows that when you [include] a systematic diet of yoga for a reasonable amount of time to improve the plasticity of parasympathetic inputs into the chest and thereby the cardiovascular system…you can help patients to improve their symptoms,” he told theheart.org | Medscape Cardiology.

He already prescribes yoga in his own practice as part of a comprehensive therapeutic regimen, he said. “We have a handful of practitioners all around the city who work with us,” Lakkireddy said.

Both he and the study authors point the economic burden of VVS both in management and in loss of patient productivity. “A low-cost intervention in the form of yoga, which essentially requires only a mat, can reduce both direct and indirect costs significantly,” note the authors.

The trial was supported under the extramural research (EMR) scheme by the Ministry of AYUSH, Government of India. The authors have disclosed no relevant financial relationships.