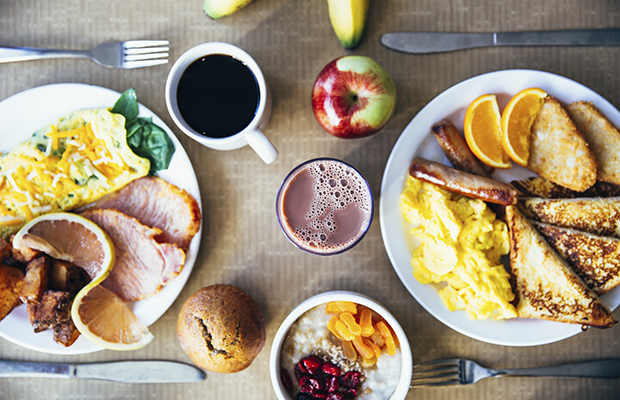 “Satiety depends on numerous factors, including how filling you expect a food to be, portion size, how long it takes to eat and its texture,” says nutritional science professor Dr Barbara Rolls. The message? You don’t need to binge-eat to feel satisfied. So, with that in mind, here are 10 smart tips that’ll help you feel fuller for longer…

Viscosity is a major factor in the feeling of fullness. So bananas are a great food to keep you full. Make your own at-home smoothie. “Freezing your banana before adding it will make the texture even thicker, which results in an increased feeling of satiety,” says researcher Guido Camps. Just remember, a banana contains around 380kJ, so be mindful of what else you snack on before lunch if you’re watching your kilojoule intake.

Fullness hack: add a low-kilojoule soup to your menu before a meal; it’ll ensure you gorge on less later. “Broth-based soups are full of water, which adds volume and weight but no kilojoules,” explains Rolls. “The sight of an extra course and the greater volume in your stomach trigger stretch receptors that signal you’re full.” In a clinical study, Rolls found that women served a chicken and rice soup before lunch reported feeling fuller than those served a pre-lunch chicken and rice casserole and a glass of water (consisting of exactly the same ingredients) or the casserole alone. The soup-eaters consumed 400 fewer kilojoules at lunch and didn’t compensate at dinner.

“Eating slowly is associated with feeling fuller for longer,” says dietician Azmina Govindji. “Foods that require a ritual – such as shelling pistachios – make you take time over them.” And, bonus, they’re packed with protein, so grab a handful as a post-gym snack and get shelling.

READ MORE: 3 Really Smart Ways To Stop Yourself From Eating Too Much

4. Keep Skins On When You Eat

Researchers at the University of Sydney created a satiety index based on participants’ reports of how full they felt after eating certain common foods and how much they devoured two hours later when let loose on a buffet. Forget jackets and mash – boiled potatoes topped the chart as most satiating. Govindji suggests rustling up a quick potato salad. “Keep the skins on as that will slow down digestion,” she says. “Stir through some Greek yoghurt, for protein and add sweetcorn, for fibre, which will help with a feeling of fullness.”

Lentils are low on the glycaemic index (GI), which measures how quickly the carbs in a food raise blood-sugar levels. “The science on how the GI of foods affects how they’re processed in the body as part of a meal can be complicated and it varies among people,” says Govindji. But low-GI foods, like lentils, are generally digested and absorbed more gradually, meaning they stay in the digestive tract for longer, keeping you full. Knock up a protein-packed lentil and grilled halloumi salad.

READ MORE: These 3 Drinks Will Help You Lose Weight – And They’re Not Vinegar

“Protein invokes satiety more than carbohydrates or fat,” says Dr Alex Johnstone, satiety expert from The Rowett Institute at the University of Aberdeen. “We don’t exactly know why, but it’s likely it causes a cascade of events, including the release of gut hormones that feed back to the brain to signal you’re full. Smash half your protein RDA with a smoked-salmon omelette – salmon is 20 percent protein and eggs deliver about six grams a pop. Job done.

In research published in Nutrition Journal, participants who were given lunch that included half an avocado had a 24 percent reduced desire to eat over the following three hours compared with those who had lunch with the same kilojoules but no avo. Forget the guacamole though. “Keep the avocado in chunks, as chewing and eating more slowly improves satiety,” says Govindji.

READ MORE: “I’m A Dietician And These Are The 3 Healthy Eating Rules I Live By”

8. Fill Up On Flavour

A study published in The American Journal of Clinical Nutrition found that eating soup with an umami flavouring (you know, that moreish, savoury taste) enhanced satiety and reduced consumption at the next meal compared with soup without. Add kombu, a type of seaweed, to soups or stir-fries and ascend to umami heaven minus any kilojoule come-down. Just one 15cm strip will flavour a meal for four. Get it at Faithful-to-Nature.co.za (R118).

“Air in food creates greater volume, so the portion looks bigger, which means you’re likely to feel satiated for longer,” says Johnstone. Another study published in Nutrition Journal found that people who ate around 400kJ worth of popcorn reported less hunger and were more satisfied than those who ate a 630kJ bag of crisps. Plus, popcorn is packed with filling whole grains – in fact, just one bag will get you more than halfway towards your daily quota.

10. Snack Before You Eat

One a day could keep hunger away. In a study by Rolls, when participants ate apple segments before lunch, they consumed 15 percent fewer kilojoules (including the apple) than without. It would be easy to attribute this to the fibre hit, but Rolls suggests that the size to kilojoule ratio of an apple and the time it takes to chew through one could also play a part. So pick one up about half an hour before lunch. You might not feel the need to reach for seconds.

9 myths and misconceptions about success (and 10 ways you can succeed)
FDA Revokes Emergency Use Authorization Of Covid Drug Ineffective Against New Variants
Study Narrows Down Long COVID Symptoms To Just 7
The Low-Oxalate Diet Isn’t For Everyone, Experts Say. Here’s What to Know.
Can a Virtual Assistant Help People With Diabetes and Depression?