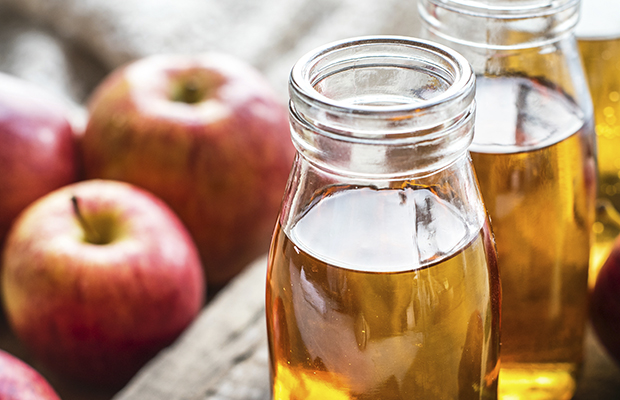 Because it’s not enough to cut out virtually every last carb from your diet and load up on fats, people (cough, Kourtney Kardashian, cough) are now sipping on apple cider vinegar in an attempt to boost their fat-burning potential even more.

Kourt famously tried out the keto diet last year and says she drank apple cider vinegarto stay full and curb her sugar cravings, adding one tablespoon ACV to a glass of water 20 minutes after she woke up and before eating dinner.

So should you start supplementing your keto fat bombs with a shot of ACV?

First: Why is this even a thing?

Both the keto diet and ACV trends claim to impact fat-burning. The keto diet actually does—you’re supposed to cut carbs and load up on fats to go into a state called ketosis, where your body actually starts burning fat for energy instead of carbs.

Apple cider vinegar’s link to fat-burning, however, isn’t quite so solid. A 2009 study in the Journal of Agricultural and Food Chemistry showed that, on a a cellular level, vinegar actually did turn on fat-burning genes—but only in mice.

Another 2009 study published in the journal Bioscience, Biotechnology, and Biochemistry found that taking 15 milliliters of apple cider vinegar per day for three months modestly reduced body weight and belly fat in 175 obese Japanese adults. Still, those results were not conclusive and more research needs to be done.

“If you wanted to extrapolate, you could say that it helps you to burn more fat, but I’m not sure you could come to such a conclusion,” says nutritionist Kristen Mancinelli. Basically, lots more research needs to be done before we can christen ACV as a magic fan burner…especially in humans.

It’s also kind of dicey to drink ACV on the keto diet—it is made of apples, after all, which aren’t allowed. (You can really only eat these eight low-carb fruits on the keto plan.)

You can drink the vinegar, says Mancinelli (once it’s turned into an acid, it’s no longer a carbohydrate), but there’s still some residual sugar in it, so drinking a lot of it isn’t keto-friendly.

So, can drinking apple cider vinegar on the keto diet help you lose more weight?

But even if it were, ACV’s effects on fat-burning would likely be pretty disappointing. “The overall impact is probably very small, and it’s not really the right focus,” says Mancinelli. “You can probably have the same effect 50 times over if you go on a brisk walk.”

Still, it’s not necessarily a bad thing to add some apple cider vinegar to your diet—as long as you pair it with food instead of taking straight shots or diluting it in water, says Mancinelli.

“Raw, unpasteurized ACV is fermented and contains probiotics, which we know has benefits,” like improved gut health, says Mancinelli.

The bottom line: You don’t need to start taking shots of ACV after every keto meal—the research just isn’t there.

World Cancer Day 2023: Perspectives from The Institute of Cancer Therapeutics
The safety and tolerability of Remdesivir in children affected by COVID-19
Screen time during infancy may have impact on academic success
NASA captures image of a bear’s face on Mars
Moderna Booster Vaccine Singled Out for Chronic Hives