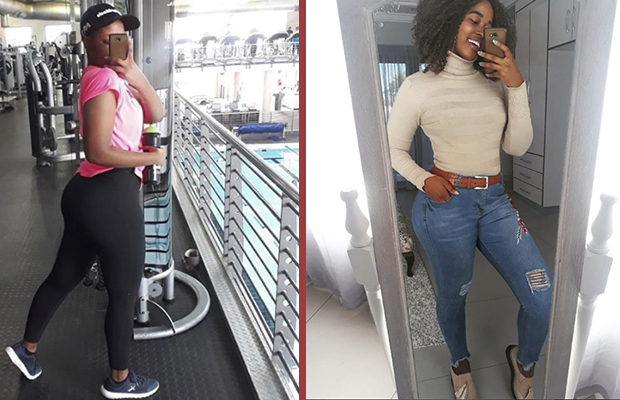 “It’s been a year since I began my fitness journey… But I haven’t been alone, I recruited my whole family into it and it’s been amazing.”

Being fit and healthy was never on Mpuse Bulane’s radar. Until she gifted herself with ‘fitness’ on her 20th birthday on 17th March 2017. “Fitness was something that had been long overdue in my life. For the longest time, I’d been unhappy with the person I was becoming. The time had come for me to change my lifestyle for the better,” she says.

READ MORE: “I Went From Having A Two-Pack To A Six-Pack — Here’s How”

After having taken the decision to make changes to her lifestyle, she recruited her entire family into it as well. “My mother got motivated and later signed up at the gym herself. We would work out together often. She’s also changed her lifestyle, which influenced everybody else in the house to do the same,” she says.

READ MORE: “I Figured Out Some Really Cool Ways To Stay Fit While I Was Travelling”

Being such a stranger to fitness, the transition was going to be tricky – but doable. “I was never the child who took part in sports, until I got to high school and was forced to take part in physical activities. I ended up playing hockey throughout high school,” she admits. So, the return to working out was within reach.

“I gained 10kg of lean muscle mass by lifting more and avoiding cardio exercises as much as I could,” she says. Note how she says “avoided” – not “ditched cardio altogether”. A typical week starts off with a warm-up jog on the treadmill – this precedes all her workouts. “I do a variety of exercises on different days of the week, spread across leg presses, barbell squats, leg extensions, hamstring curls and bodyweight lunges,” she says. That’s not all, though: she also does incorporates ab workouts and strength training.

“I used to have the bad habit of not having breakfast, which I’ve dropped because I now understand the importance of fuelling up your body with the right nutrients to give it a kick-start for the day,” says Mpuse. How her diet looks now? “For breakfast I usually have a shake before training because I prefer starting my day off with a great workout session. Then I always make sure that I have the three basic elements on my plate. For lunch, I’ll usually have brown rice (carb), broccoli (veggie) and chicken breast (protein). For supper, chicken salad is my favourite. I enjoy snacking on fruit, yoghurt, egg whites and foods high in protein,” says Mpuse.

READ MORE: “My Passion For Food Helped Me Lose 22 Kilos In Less Than A Year”

5 Cool Things You Need To Know About Mpuse

– Her favourite exercise is squats.

– On cheat days she enjoys treating herself with a large box of sliced pizza.

– She can lift her own body weight now, which is something she couldn’t do before.

– In her gym bag she always has a bottle of fruit-infused water.

Mass Shooters’ Common Traits; FDA to Let Gay Men Give Blood; Restaurant Health Fee?
WHO says Covid remains a global emergency but pandemic could near its end in 2023
FDA Revokes Emergency Use Authorization Of Covid Drug Ineffective Against New Variants
Biden administration plans to end Covid public health emergency on May 11
Does having a teen feel like living with a chimp? You may not be far off