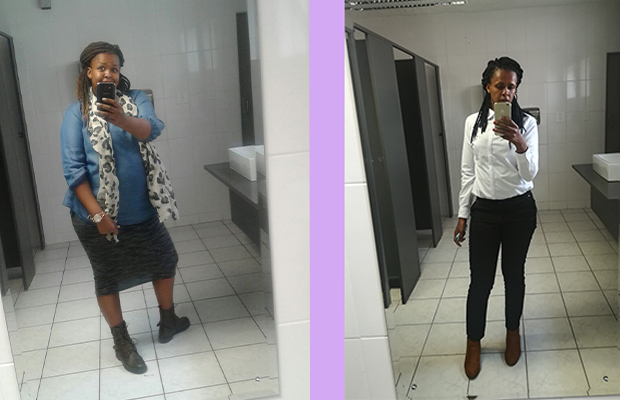 Like many moms, Nthabiseng’s body changed after having kids. After the birth of her third child, this mom decided that it was time for her to change the way she felt about her body. By saying no to sugar and carbs, Nthabiseng managed to shed 50 kilos and take back her confidence.

Nthabiseng never really struggled with her weight, in fact she says that she’s been skinny for most of her life. It was only when she became a mother that her got out of control. After the birth of her second child, Nthabiseng went from 88kg to 115kg within a year. This was due to an unhealthy lifestyle that included way too much junk food and not enough movement. “I would drink a two litres of fizzy soda by myself. I would also eat a slab of chocolate a day, plus biscuits,” she admits. She says that she tried to exercise but would give up after a few days. In 2014, Nthabiseng says that she reached her heaviest weight, and by 2016 she was pregnant with her third child.

READ MORE: “I Transformed My Body In 12 Weeks — Without A Personal Trainer”

“My third pregnancy was very challenging physically and emotionally, and that was when I made a decision that after giving birth I was going to work hard to get my body back into shape,” she explains. Three months after giving birth, Nthabiseng started jogging every evening and later added squats and core exercises. She says that she came across the Women’s Health Facebook page where she found loads of motivation, tips on how to lose weight and exercises to help target certain body parts. After a month of working out, she bought a skipping rope and weights, and added that to her exercise regime.

When she returned to work from maternity leave, she found that her colleagues were doing a weight loss challenge, so she decided to join in. “At the end of the challenge I had reached 100kg, that pushed me to want to lose more weight,” she says. But like most weight loss journeys, Nthabiseng hit a plateau, “The scale kept stalling between 100-104kg and it was so frustrating”. In an effort to shed those stubborn kilos, Nthabiseng joined her local gym. “I carried on with running in a treadmill and did more squats and abs exercises,” she explains.

In September, Nthabiseng hit another setback — she had to have surgery to remove gull bladder stones. Recovering from surgery meant she couldn’t exercise for six weeks. Knowing that she couldn’t exercise, Nthsbiseng had to ensure that her eating was on par to help her achieve her goals.” I told myself that I had to be disciplined with my diet. I went on a no sugar, law carb diet, which worked really well for me,” she says. By quitting carbs and sugar, she was losing up to 1.5 kgs a week. By the time she returned to the gym, she was had lost over 10 kilos, and was feeling better than ever.

READ MORE: 3 Really Smart Ways To Stop Yourself From Eating Too Much

After quitting sugar and carbs, Nthabiseng says that the weight basically melted off. This is why she still doesn’t eat a lot of sugar, however she has started eating more carbs and protein. She also allows herself the odd cheat meal (because balance, right). Her exercise regime hasn’t changed much since her major weight loss, but she has since stopped spinning as her new goal is to build muscle. She still works out four days a week ensuring that her workouts target her full body to help her tone up.

Since her weight loss, Nthabiseng says that she’s regained her confidence and that she “started to think like a new person. My family and friends, are so happy for me”. She’s dropped 5 dress sizes and her next goal is to run a marathon. Feeling like a new person is not the only thing that changed, she says that her thoughts about life have changed too, “I think before doing things, I forgive myself for mistakes I’ve done in the past and I have learned not to judge people,” she explains.

Be a goal getter: “Have a goal and give yourself a timeline for achieving the goal”

Check the labels: “Look at the nutrition list on the pack, you’ll be shocked at how much sugar there is in processed food”