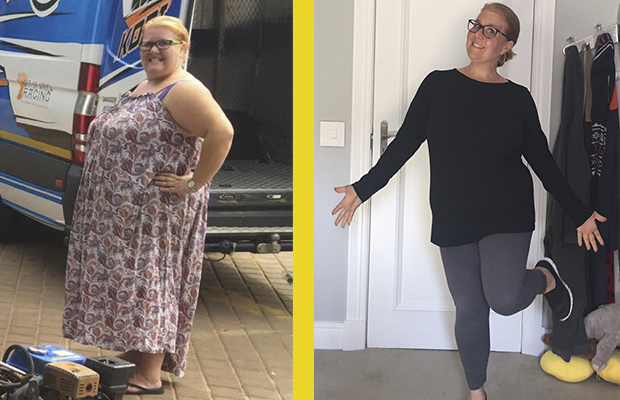 At the age of 39, Monja Conradie found herself tipping the scales at 130 kilos. Tired of letting food and her weight control her life, she decided to take responsibility of what she ate. She started tracking her food, lost 50 kilos and finally started living the life she’d always dreamed of. Here’s how she did it…

Secret weight-loss weapon: Weight Watchers – “and doing it for me”

Like many of us, Monja struggled with a her weight from a young age. Hight school was a difficult time, which resulted in her becoming an emotional eater. She started dieting at 14. “I remember my first ever diet. I was only allowed to eat bananas and drink skim milk three times a day for a week. After that week, I could eat normally,” she explains. And so began Monja’s cycle of yo-yo dieting. But, as with any fad diet, while the results may be fast, they aren’t everlasting. “As soon as I stopped the diets, I’d pick up all the weight I’d lost – and more!” she says.

This cycle would continue for years, resulting in Monja weighing 130kg by 2016. Coming from an Afrikaner family, meals often included potatoes, rice and fatty meats. And she loved foods that were convenient: fast food, pies and sandwiches. Added to that, she was addicted to fizzy drinks: “I could easily drink at least two litres of cola a day.

Although Monja wasn’t exercising, she was active because she worked with kids. “I was always walking and carrying things,” she says. But although she was active during the week, weekends were spent firmly on the couch. Eventually, her weight started to take a toll on her body. “I avoided the stairs because I’d be out of breath after just six steps!” Her energy levels were constantly low and she couldn’t make it through the day without an afternoon nap.

READ MORE: “My HIV Diagnosis Forced Me To Face My Destructive Habits”

The year 2016 was one of change for Monja. An ear infection that caused her to lose her balance landed her in hospital. Before the doctors knew what was wrong with her, Monja feared she was having a heart attack. “I was so scared, but thank goodness it wasn’t my heart.” Later that year, when she applied for disability insurance, she was denied – her weight made her a liability. It was then that she started thinking about changing her life. In May, she attended a self-enriching workshop which helped her to realise that she needed to make herself a priority. She moved to Cape Town and joined Weight Watchers.

“I started taking responsibility for what I ate. I tracked food and wrote down how I felt each day. This helped me find my triggers and how to avoid them,” she explains. She used a point-based system that works by giving sugars and saturated fats a certain number of points. She also attended weekly meetings where she was weighed and given support. Monja cut out sugar and stopped cooking with butter and oil. And her fizzy drink addiction had to become a thing of the past.

At her starting weight, Monja couldn’t exercise, but after losing the first 20kg, she joined the gym. “I started going twice a week. I’d cycle for 20 minute, then walk for another 20,” she says. When she wasn’t at the gym, Monja made small changes like parking further away from her destination and taking the stairs instead of the lift. She also discovered that she loved hiking. And pretty soon, all the hard work starting paying off.

Monja still avoids saturated fats and keeps sugar to a minimum. On the odd occasion she allows herself a sugar-free fizzy drink and once a week she indulges in a cheat meal. When she eats out, she opts for something from the salad menu – without the dressing. “If I cook, I’ll have something a bit more interesting because I know what goes into it,” she explains.

And she’s included dancing in the healthy-lifestyle mix. “I’ve wanted to dance since I was young,” she says. “My sister became a ballroom dance instructor and she introduced me to salsa. I fell in love with it, but I just couldn’t do it. I had the rhythm, but my body was always in the way.” Last year she joined a salsa class – and she hasn’t looked back. “I love it! In November I moved up to intermediate level.” She now salsas five times a week and hits the gym when she can. Next on her fitness list? Cycling. “I bought a mountain bike and I want to do the Argus next year!”

READ MORE: Should You Be Intermittent Fasting On The Keto Diet?

After dropping from a size 28 to 16, Monja feels healthier than ever. “A normal sized towel can fit around me. And I’m no longer limited to certain stores,” she says. “I could finally go zip-lining because I wasn’t too heavy. I went surfing and could fit into the wetsuit!”

“I’m finally the person I was meant to be. I’m not hiding behind the fat anymore! I have so much confidence and can say I’m finally happy,” she exclaims. During her weight-loss journey, Monja rewarded herself for every five kilos lost. And her reward for losing 50kg: an overseas trip and a tattoo. “I got the tattoo and I will be going to the UK in December.”

Be conscious of what you eat: “Write down everything you eat and take responsibility of what you put in your mouth.”

Do it for yourself: “Losing weight is for you and only you. It’s not for your husband, children, parents. You want to lose weight because it will make you happy or it will change your life. When you can truly make the decision that you want to lose weight, everything will fall into place.”

Prescribing Medication Dosage According To DNA Profile Lowers Side Effects By 30%: Study
World Cancer Day: Half of Cancer Deaths Can Be Prevented
Brukinsa (zanubrutinib) Approved in the U.S. for Chronic Lymphocytic Leukemia
Childhood Adversity Tied to Race-Related Differences in Brain Development
How to look after your mental health while waiting for NHS support