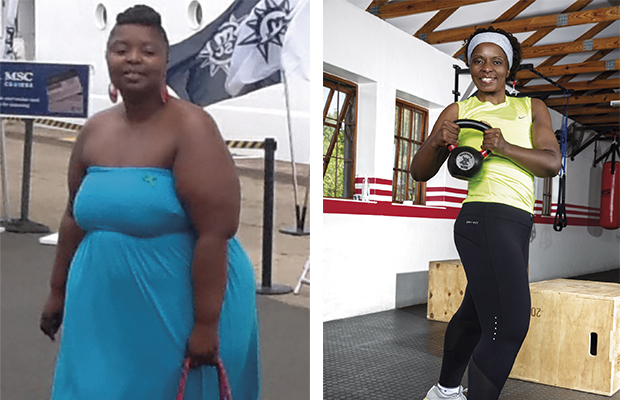 “I owed it to myself to prove that food has no power over me.”

Losing weight is never easy but if you’re determined anything is possible. Gcobisa proved to herself and others that even after years of bad eating habits, it was totally possible to take control of your life and change it for the better.

Here’s how this mom of two did it…

Pregnancy is a lot of things, but it’s definitely not the easy route to a slim silhouette. Gcobisa learnt this the hard way after two pregnancies left her almost twice as heavy as before. “I had my first child in September 2004,” she says. Before giving birth, Gcobisa weighed 78 kilos. After? 110kg. “I decided not to lose weight because I was planning on having a second child shortly after that – it was a deadly mistake,” she says. Twelve years after giving birth to her second child, Gcobisa weighed 136kg.

READ MORE: “I Lost 14 Kilos In Three Months — And Gained A Whole Lot Of Body Confidence”

Despite the gain, her weight didn’t bother her much. “I never felt pressured to lose weight. I had this amazing self-confidence and I felt beautiful from the inside out,” she says. It could be down to the exercise: she had started running and going to the gym in an effort to lose weight, but struggled to shift any kilos. In June 2015, Gcobisa had a serious conversation with herself. “I said to myself, ‘You love exercising, you’re actually an addict. You might as well look the part’,” she says. “That meant I had to seriously change my relationship with food and see food as a source of energy.

Gcobisa’s diet was mainly meat and takeaways, so drastically changing her eating habits took determination. “What helped in the first few days was my mental strength,” she says. “I owed it to myself to prove that food has no power over me.” It took her a month, but she eventually adapted to a diet of less meat, with veggies subbed in for all the junk food.

READ MORE:  “I Went From Chubby, To Skinny, To Finally Being Fit And Thick”

Once she became lighter, exercise started feeling easier. “I used to feel pain in my legs after exercising, but it’s gone now. I’m also more flexible,” she says. She dropped six dress sizes and seriously upped her fitness game: she’s run the full Soweto Marathon. The best part? Being the best version of herself. “I wanted to be able to climb the stairs without being out of breath, I didn’t want to suffer from chronic diseases like high blood pressure. The losing part was just the cherry on top,” she says. Hear, hear!