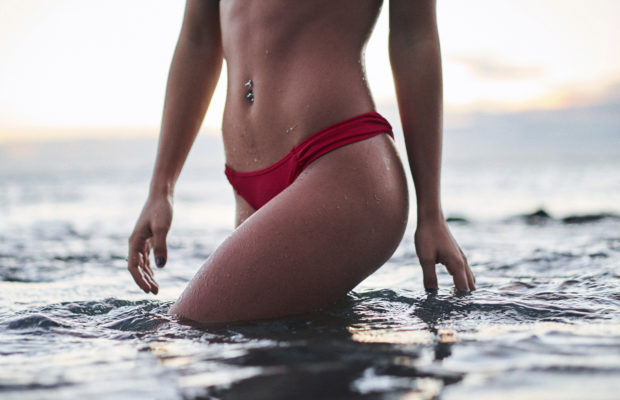 I’ve never done a bikini shoot, nor have I particularly wanted to. These days, every second Cape Town Girl is posing for the ‘Gram on Clifton beach, looking all sorts of hot. But my butt has never been that perky, nor have my abs been that defined.

But for this year’s Staff Fitness Challenge, the annual competition the people behind Women’s Health do to stay in shape in winter, I took up surfing. Every year, we also do a photo shoot for said challenge. This year, I was to be clad in a bikini. My moment had arrived! And I was woefully unprepared.

If I had this body, I too would be really happy to be friends with it.

However, I am otherwise endowed and so in desperation, I consulted a part-time model friend (let’s call her Adriana, cz duh) about my lofty goals. She responded in kind:

I pressed her for more and after a bit of back-and-forth gif-ing, she deigned to share her bikini-ready plan with me. I also consulted several websites about what models do to look toned for shoots and created a game plan. Below, the key points I’d gathered, with annotations on each.

Adriana told me to cut my calories to 1600 a day. My standard is 1200, so I patted myself on the back for that. I was also meant to cut out all processed foods: no bread, pasta, sweets or cool drinks. This vexed me greatly because already, my diet was pretty clean. Even so, I ditched bread, pasta and anything starchy. I was also to increase my salt intake. This, Adriana told me, was to increase water retention, and then cut it drastically. When you’re eating nothing but raw spinach, finding salt is not easy. I took to sprinkling it liberally on hummus, and salads. Everything tasted awful.

The next (and hardest step) was to increase my water intake from one litre a day to three. For seven days, I spent most of my time like this:

I was pretty hungry most of the time, but Adriana advised me to chug water instead. My the end of the week, I was so bloated I couldn’t fit into my skinny jeans. It was sad and I felt like a Teletubby.

In this leg, I was to cut salt as much as I could (easy) and reduce water to two litres (also easy). I probably would be looking like Adriana Lima herself at this point if my work schedule was allowing me to make it to every gym class. But alas, I either snoozed through an early-morning session or found myself to busy to prioritise the HIIT I was meant to be getting in twice weekly. As a result, I was looking as round as the pug in the toilet above.

No salt! Minimal water! Continue training as usual! I died. And then came the uncertainty. Was I allowed to drink coffee? Was it ok to eat spinach? Most sources said to ditch the fibre and go for carbs – now would be the time for your body to drain itself of water so that all that was left is the lean muscle you’ve been sculpting for the past two weeks. Gulp. I confusedly gave up broccoli, spinach, and beans. I found myself subsisting on bananas and sweet potato. That’s it. No salt, no sides, just sweet potato in its roasted, sad form. In a last-ditch effort to shed water weight, I also took to one very strong HIIT session, along with a heavy weights session (to pump any muscle). By the end, I was feeling dizzy since there was just no water to go around and very little food. The next day, I tried to eat more carbs and had no water. I also ruled it ok to drink caffeine: some say it has no effect, but others find that the diuretic impact of coffee can suck out any remaining water. I chugged.

As parched and light as I could be, I traipsed out into the winter sun clad in the most unflattering rash vest (it clung to every orifice) and skimpy bikini bottom and posed.

Looking at the pictures, I’m not convinced I look any different than I do on a regular day. Maybe it’s because I already eat a ton of sweet potato, and never drink sugary drinks, and always get around two litres and always prioritise my greens. The water dumping method was something I relied on to look chiselled and sculpted, and quite frankly, like a body type I just don’t have. I’m a regular girl who can surf, box jump and run far enough – with a regular body that just isn’t genetically resembling plywood. That’s generally the problem with diets and #fitspo – no two bodies are the same, and no dearth of salt or water will render me looking like Jessica Olie. Oops.