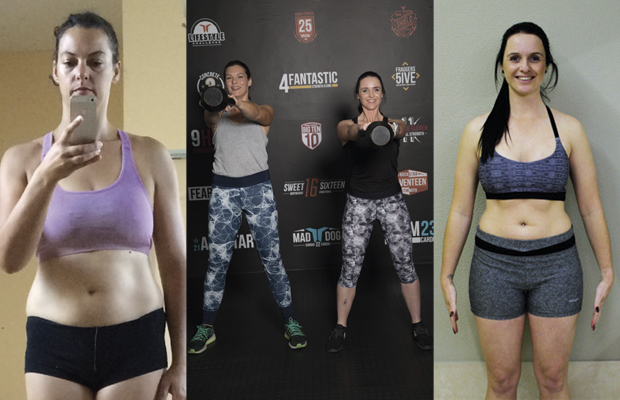 Two is always better than one

Finding the motivation to workout can be pretty tough but like many things in life, its always better when you have partner. When Reanne and Nicola met in a group class at Huba Fitness, these two knew that they could help motivate each other to stick it through and finally shed those unwanted kilos. Here’s how they did it…

READ MORE: “I Stopped Eating Takeaways And Lost 63 Kilos — Here’s How I Did It”

In a way, children indirectly influenced both Reanne and Nicola’s weight gain. Reanne spent a year au pairing in Amsterdam, where the kids ate a ton of junk food – and she was happy to join them. “Being around kids meant there were always lots of sweets and treats,” she says. In a year, she’d gained 15 kilos. Nicola’s gain had a similar psychology: she was pregnant with twins. “My gain was mostly through allowing myself that ‘one more treat’ because I told myself I deserved it,” says Nicola. During her nine months, she gained 30 kilos.

READ MORE: “I Lost 14 Kilos In Three Months — And Gained A Whole Lot Of Body Confidence”

Once Nicola’s kids were born, shifting the weight became a priority, especially since her gynaecologist told her losing weight would become harder the older she got. Reanne, on the other hand, was in denial about her weight – but it soon started to play on her self- esteem. “I couldn’t take people being mean and passing comments about my body,” she says. They both signed up to Huba Fitness, a gym in Cape Town, where they met at the group training classes.

Both Reanne and Nicola chucked out their unhealthy diets and opted for wholesome grub. Nicola signed up for FitChef’s meal delivery service, while Reanne made her own food, opting for protein like eggs, chicken and tuna with veggies and fruits. They both attended group workouts three times a week and loved the social, ever- changing sessions so much that they ramped up their attendance to five times a week, throwing in outdoor runs in between classes.

READ MORE: “I Turned Vegan And Was Finally Able To Lose Weight”

Between the two of them, a total of 25 kilos have been scorched away – and the feeling of success makes it worth it. “I was super proud when I could deadlift 80 kilograms,” says Reanne. Nicola also measures her success by what she can now achieve, physically. “I ran the Ultra-Trail Cape Town 35km. I was immensely proud of myself for completing it in time,” she says. Now that’s a reward and a half.

In need of more inspiration? Check out this mom who went from a having a major health scare to the healthiest she’s ever been! Or how about the woman, who went from never exercising to being a spinning instructor